It feels good to be back in the studio! I have been out of town for most of January and have not had a chance to sit down and do any recording or mixing in a while.

Nate Brown has been dedicating his Thursdays to working with me in the studio as an assistant. He runs sound for Polen Band and has his own band, so it is a great opportunity for him to grow as a sound engineer. He has been working through a workbook and is mostly focusing on learning how the studio works and learning Logic Pro right now. We will switch to Pro Tools after he has a good grasp of Logic.

Nate spent the first part of today working through his Logic Pro workbook, and then I had a special treat for the second half of the day.

I wanted him to have a chance to get his hands on the board and put his skills to work by acting as an engineer, so we embarked on a 4 hour challenge. Our goal was to get a song completely recorded and rough mixed from 12:30pm to 4:30pm. In 4 hours we would have a song (or at least that was the plan)!

I was the lone studio musician (and I helped in the control room from time to time -especially on quick editing, comping, and mixing).

I have had a great, old John Denver song stuck in my mind, so I decided that would be the song for us to record. The song is called “Song for the Life”.

I started with acoustic guitar. I am playing a Martin D28 Custom and we captured it with a Blue BlueBerry on the sound hole and a Shure SM81 on the fretboard. Both of these mics were run through a Chandler TG2 preamp. Nate set the mics and preamps. I mostly only offered help as requested.

We took a couple of quick passes through recording the acoustic guitar, and then I did a quick blend so we could move on. 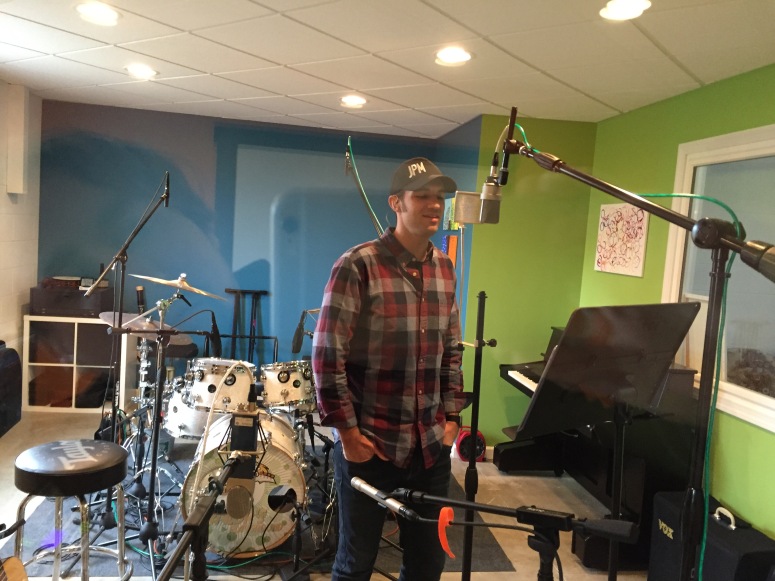 Next I sang vocals. We went with a Neumann TLM103 through a Shadow Hills MONO GAMA preamp. We first took a pass through the “discrete” setting, but decided to switch it to the “nickel” setting. The setting change really took a nice, mellow sounding vocal and hyped it in the top end to help it cut through the mix.

I took a couple of passes through the vocals and then quickly comped it together. I wouldn’t say it is my best work ever, but we were on a time crunch…

On to the drums! We went for overkill on the drums. I played my studio 5-piece DW set (already set up) with an Audix D6 on the kick, plus a DW Moon Mic on the kick. There was a Shure SM57 on the snare top and an Audix i5 on the snare bottom. We also put microphones on the hi hat and toms, but I ended up deleting those channels from the recording because I thought the sound really fit the song better without them. We used a pair of Neumann KM184 small diaphragm condenser microphones for the overheads, and an Audio Technica AT4060 Tube Microphone for a room mic. Most of the drums (except for the Moon Mic and overheads) went through their own dedicated channel on a couple of Universal Audio UAD 4-710d preamps.

I actually played the drums with rute sticks, and I was really liking the vibe. After a couple of takes I did a few quick edits and called it “good enough” so we could move on and finish within our 4 hour time slot.

I felt like the song was going to need a shaker, so I played the shaker in front of the Shure SM81 that was still left out from recording acoustic guitar. 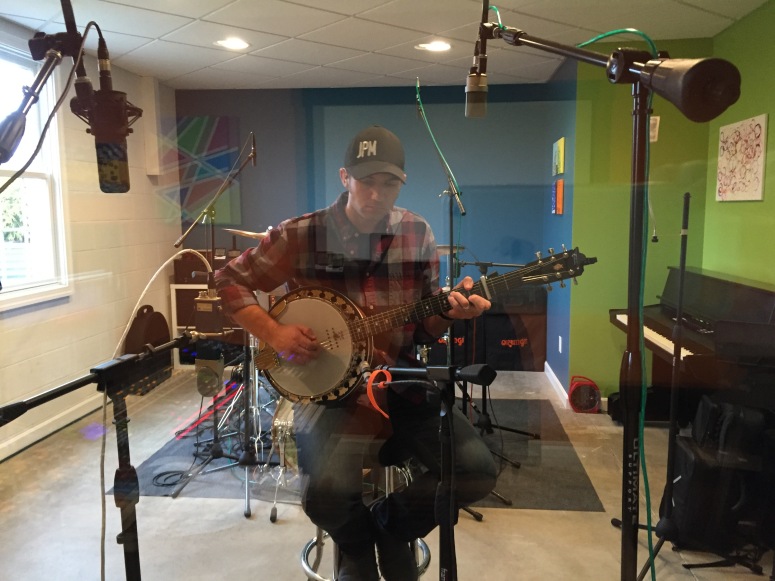 Next was the banjo. I actually put a fresh set of strings on my Deering Boston 6-string banjo and played it in front of the same Shure SM81 microphone that was still set up for the acoustic guitar. Normally I would have taken these mics down by now, but I left them up in case we needed to overdub on the acoustic or add additional acoustic guitar parts (which we may have done if not for the time crunch).

We obviously needed bass guitar, so I pulled out my Fender American Deluxe Precision Bass and played it directly into an API 512c preamp (and further shaped it with the Native Instruments Guitar Rig plugin). We fixed wrong notes as we went and had the bass guitar knocked out quickly, leaving a bit of time for the electric guitar.

I set up a Fender ’65 Deluxe Reverb amplifier and captured it with a beautiful Royer R-121 ribbon mic going into a Neve Portico 517 preamp. It was sounding nice and glassy. Once the amp, mic, and preamp were dialed in, I played a Gibson Memphis ES-335 Dot with a Bigsby for a nice, slightly warbly rhythm electric guitar. Next, I fiddled around with a lead part for probably a half an hour without any excitement (it was all garbage). Then I got smart and pulled out my G&L ASAT (Tele style), which fit the song and part so much better. After a couple of passes through the lead electric guitar, I felt happy enough to start mixing.

We had roughly 30 minutes to get a rough mix together and finish within our 4 hour time slot.

Admittedly, this is not the best recording in the world, but I am really happy with how it turned out and I think it was a great project for Nate to get his feet wet in being an engineer.

Here is what he had to say about the 4 hour challenge:

Building a song from start to finish was really helpful. Mic setup is super important and working through the how’s and why’s beforehand was great.

It was neat Setting up two mics for the acoustic guitar. It’s good to [understand] the nuances of micing both the sound hole and fretboard and hear the difference.

Being able to have the hands on experience of recording a song [from] start to finish I think was the most useful experience to date. Setting up mics and instruments for recording helped me work through the whole process.

I am beginning to [become familiar] with the specific mics and preamps your using and not just the name, but knowing where and how to use them.

Getting good at comping and editing is something I need to work on. Recording a couple of takes and then watching you edit and comp them together was very helpful though. The biggest challenge is knowing where and how to use the tool I need.

There are a ton of key commands I haven’t learned yet, as well as tools for comping, cutting and fading. I know this will come with time but the more I know the faster I will be.

Loved recording. I think putting the song together from start to finish was a blast. I wouldn’t mind doing that a couple more times!

Here is the finished product. Give it a listen and let me know what you think in the comments section below.

There is plenty that I would love to change, redo, add, or subtract, but overall not bad for a succesful 4 hour challenge…

One thought on “Song for the Life (4 hour challenge)”